High fantasy has been done over and over again in massively multiplayer online role-playing games, but somehow Aion: Tower of Eternity manages to make its fantasy setting seem fresh and new. That's partly because this upcoming MMORPG from NCsoft uses the same technology that powers the impressive Far Cry, but it stems more from the fact that the universe of Aion is so unique. We were first introduced to Aion at last year's E3, so NCsoft is showing off the latest progress on this game, which is due out next year.

Aion is set on Atrea, a world that's been sundered in two. Not only that, but this isn't a world where the habitable surface is on the exterior of the globe. Instead, the world is like a giant shell, with the habitable surface on the interior of the sphere's surface. The upper half of the world is inhabited by the Elyos, a race of beautiful beings, while the lower half is the home of the Asmondians, a race whose appearance is being kept a secret for now. A shattered stem known as the Tower of Eternity connects the two halves. Meanwhile, the neutral area between the two halves is known as the Abyss, which is inhabited by the Balaur, a non-playable race.

When you create a character you'll choose one of the two factions, and the focus of the game is player-versus-player as you battle the opposing faction, but also player-versus-environment as you battle the Balaur. However, since up to 90 percent of the game consists of persistent levels, this means that you'll be able to battle on levels that are heavily populated by other players. So if you're in the Abyss, it's possible that you can find yourself in what NCsoft is calling player-versus-player-versus-environment, as all three factions can engage in the same battle.

As you can probably imagine, this is a very magical world, and that translates into a visual look that's almost dreamlike. That's most evident in the way that your character can literally sprout wings and fly through the air, almost like angels. This will play an important role in the game, as you'll be able to explore and battle by flying around. The big question that the developers are trying to balance is how to balance this. Currently, the idea is that you'll be able to fly for a limited amount of time before you have to land and let the power recharge. Still, it's a cool sight to soar around the game.

It's impressive that NCsoft has managed to make a fantasy MMO that looks unlike anything else. Aion is being prepped for release in Asia, North America, and Europe simultaneously sometime in 2008. 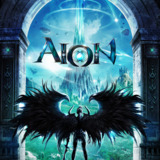