Computer-animated talking animals are all the rage in Hollywood. Something about conversing critters hits a high note with the kids, as evidenced by the box office numbers of Ice Age 2: The Meltdown and Madagascar, among others. The unwritten rule that every children's movie has to be made into a video game has also boded well for several game publishers, including THQ (Finding Nemo) and Activision (Madagascar, the forthcoming Over the Hedge).

Sony Pictures and Ubisoft are hoping that trend continues with Open Season, which hits theaters later this year. Ubisoft will be bringing the game adaptation to retailers in mid-September, a few weeks before the movie is released. The action game is being developed by Ubisoft's Montreal studios.

Open Season will blanket all systems, as Ubisoft today revealed that it will be released "on all available video game platforms." Presumably, this means that the game will be released on the PlayStation 2, GameCube, Xbox, PC, Game Boy Advance, DS, PSP, and Xbox 360, though an Ubi rep could not confirm the list at this time.

The talking animals in Open Season are Boog, a domesticated grizzly bear, and Elliot, a mule deer with a salesman's mouth. Elliot convinces Boog to liberate himself, and the two take off to the woods...just days before hunting season kicks off. Boog discovers his wild side and bands the woodland creatures together in an effort to turn the tables on hunters.

The game will see players taking on the role of both Boog and Elliot, as they follow the film's storyline. The characters will use the land and its inhabitants to their advantage, with skunk bombs, acorn-chucking squirrels, and wascally wabbits. Friends will also be able to compete against each other with minigames that support up to four players.

Open Season has not yet been priced or rated. 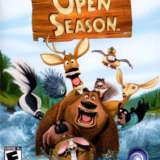