The great strategy role-playing game that mecha anime nerds swore would never make it to North America is officially coming to North America. We go hands-on with an English-translated version.

LOS ANGELES--Super Robot Taisen: Original Generation (aka Super Robot Wars) is a Game Boy Advance strategy role-playing game similar to great strategy titles like Fire Emblem and Advance Wars. It's part of a long-running series from Japan, which is known for one very distinctive twist: It features a huge who's who of Japanese giant robots in what's a pretty amazing crossover for fans of this sort of thing. Gundam, Macross, Evangelion, Giant Robo, and many other mecha franchises are all bunched up into Super Robot Taisen, representing many of their distinctive robot designs. The robots are drawn in cutesy, super-deformed form, but the lighthearted look of Super Robot Taisen belies what's by all means a deep and complex strategy series. This particular game, Super Robot Taisen: Original Generation, unfortunately is missing the licensed characters that define the series. However, all of the mecha in the game are created by Banpresto and serve well as homages to a lot of the classic designs out there. We got a chance to play an English-translated build of the game at E3 but quickly tore ourselves away from it for fear of getting addicted to it right then and there.

Super Robot Taisen: Original Generation has its own story and characters, and much like the anime that inspired it, the game takes its time to tell a good story, not just show robots beating each other up. So the robots are presented out of the context of their original settings, which is fine, because you'll either be thrilled to recognize them or you'll just think they look cool. The story of this game is similar to its source material, involving a threat from outer space, an inexperienced young mecha pilot, and other such archetypal plot devices.

Gameplay is reminiscent of Fire Emblem or Front Mission. You take turns with your opponent moving your various units on an overhead tactical map, and when you initiate an attack, the game cuts away to a combat sequence. Here, the game's lavish attention to celebrating its giant robot cast becomes apparent, as each of the 2D-animated robots boasts smooth, highly articulated animation, and they basically look great as they fire away at and slam into each other. You can skip the combat sequences if you want, but it'll probably take you several dozen hours to get sick of them. Speaking of which, the game promises 40-plus hours of gameplay for its main story mode, so this isn't some cheap bit of fan service.

You get to fully customize your robots as you play through the game, which enables you to tailor your robot squad to best suit your preferred play style--and your preferred mecha designs. One nice touch about the gameplay is that the robots' intended scale really does come across, simply by how many hit points they have. Attacks routinely dish out thousands of points of damage at a time, making them seem powerful relative to what you normally see in an RPG, as well they should. The controls are solid and familiar--this game doesn't mess with the strategy RPG formula.

Super Robot Taisen's English-language translation looks fine from what we've seen, and the gameplay appears to be intact as compared with the Japanese version. Publisher Atlus is pretty hardcore for not even translating the game's title to the more-familiar Super Robot Wars, and we salute them for having brought this game to the West. May they fare well in trying to figure out whatever legal logistical nightmare it would take to bring all the licensed mecha from other Super Robot Taisen titles over to these shores in the future. For now, we can't wait to play this game when it releases in just a few weeks.

Editor's note 05/12/06: Our preview originally stated that Super Robot Taisen: Original Generation would feature a cast of licensed mecha from series such as Gundam, which is incorrect. GameSpot regrets the error. 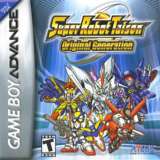