Midway's arcade-racing franchise makes its way onto the Sony PSP.

Midway will be showing off a PlayStation Portable arcade racer at the Electronic Entertainment Expo 2006 called simply, Rush. Based on the longtime arcade-racing franchise of the same name, Rush will feature free-roaming racing set in Los Angeles. You'll be able to explore several areas of LA based off regions like Santa Monica, South Bay, South Central, Hollywood, and Downtown, and steal dozens of licensed cars to drive around each area. Vehicles include exotics and muscle cars such as Corvettes, Saleen Mustangs, and the Impala SS. The missions in the game will have you stealing vehicles, racing for respect and money, and even taking stolen rides to chop shops for revenge. If you don't like the stock equipment on the cars you steal, you can use money you earn in the game to get performance and visual upgrades at West Coast Customs, the shop made famous in the MTV show Pimp My Ride.

There's a special arena in Rush where you can drive up loops, and do jumps and crazy car stunts. The multiplayer aspect of the game includes a number of modes, including standard street races and cruise missions. On the audio front, an exclusive hip-hop soundtrack will include songs from artists such as Lil' Kim and Twista. The game is currently slated to ship on the PSP in September. Stay tuned to GameSpot for more details on the game as they become available. 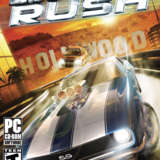