A.D.A.M. (AKA the freaky android with the gun in his face) returns in Konami's sequel to its bizarre PSP launch title. We check it out at E3 2006.

LOS ANGELES--By all accounts, Rengoku: The Tower of Purgatory should have been one of the coolest of the PSP's launch titles. You played a rather haunting-looking android named A.D.A.M. who can literally absorb the weapons of the fellow androids he slaughters. Oh, and he totally has a gun bolted to his face. Robot death and face guns? How do you go wrong? By making the combat overly cumbersome, the visuals bland, and the game as a whole utterly incomprehensible, that's how. However, the game must have done at least reasonably well for publisher Konami, because Rengoku 2 is set to hit store shelves in North America later this year. The game is on display at E3 2006, so we figured we'd take a look and see if this sequel has any more to offer than its predecessor.

Conceptually, Rengoku 2 seems very similar to the first game. A.D.A.M. is equipped with four weapons attached to his body, with one in the face, one in the chest, and one in each arm. Like the previous game, we found ourselves running through random corridors, entering rooms and blasting away at enemies that apparently live in those rooms. Rengoku 2 does have a slightly different premise, in that the game features eight distinct levels (seven of which are based on the seven deadly sins) and apparently, none of those levels are randomly generated, as they were in the last game. At least, Konami has made no mention of random level generation in this sequel up to this point. But nonrandom levels aside, the gameplay felt pretty familiar. You'll also still be able to upgrade A.D.A.M. with items from fallen foes, and the game purportedly includes 300 unique weapon combinations.

Though we didn't get a look at it in this particular demo, Rengoku 2 will include several multiplayer modes for up to four players via wireless ad-hoc. However, we do have details on the game's multiplayer functionality from our hands-on time with the game back at last year's Tokyo Game Show.

One particularly positive thing we did take away from our time with Rengoku 2 is that the visuals seemed more distinctive than they did in the last game. Enemies seemed to stand out more from the environments, and were more colorful to boot. The aesthetic style of the game is still markedly similar to the first one, which makes sense, since character artist Jun Suemi is on board once again to provide art design for the game.

For better or for worse, the demo of Rengoku 2 we played seemed very similar to the original game, though we really only got a small chunk of what the full game will have to offer. We'll bring you more on Rengoku 2 between now and its release later in the year. Stay tuned. 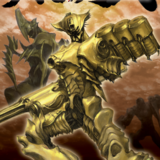