Feel like smacking around some dudes? Project H.A.M.M.E.R. is out to show just how fun catharsis can be.

LOS ANGELES--Although very few details were revealed at Nintendo's press conference today, the company did announce a few new games, including Project H.A.M.M.E.R., which Nintendo implied will be part of its new group of properties that it will be exploiting in the future, in addition to the classic Metroid/Zelda/Mario triumvirate.

So what do we know about Project H.A.M.M.E.R.? Not much, honestly. Only a few glimpses of the game were on display, but they all appeared to revolve around a huge, armor-clad protagonist that wields--what else?--a huge blunt instrument with which to hit his enemies. Unfortunately, Nintendo didn't show anything regarding the game's Wii controller inputs, so it's difficult to know precisely what we have in store for us. But it appears to be a pretty standard third-person action game focusing on melee attacks.

Nintendo, however, released more information on the game in a subsequent press release. Apparently, the player character in Project H.A.M.M.E.R. is "the only hope against an army of marauding automatons." The nunchuk controller will be used to move your character, while the Wii remote will be used to swing your hammer. Side-to-side movements will result in pure swings, while raising the remote and dropping it will cause your character to drop an overhead swing onto the heads of your foes.

Will you be able to save America from a horde of rampaging robots? Only time will tell, but we're betting that Nintendo will deliver the goods with Project H.A.M.M.E.R. We'll have more details on the game as they become available, so stay tuned to GameSpot. 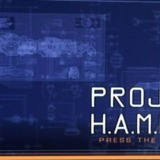