We get a peek at an upcoming stand-alone expansion to the nearly released WWII strategy game.

LOS ANGELES--Though North American strategy fans haven't yet had a chance to play the original Pacific Storm, the developers are already hard at work on a stand-alone expansion pack to the game called Pacific Storm: Allies. Allies adds a number of enhancements to the original game, such as a third playable faction (the British) and the ability to work with computer-controlled allies. Each player-controlled faction will have a corresponding allied nation assigned to it. The Americans will be able to work with the Soviets, the British partner up with the Australians, and the Japanese can get assistance from Germany. So long as you keep up diplomatic relations with your ally during the game's strategy mode, you'll be able to call upon units from your allied faction. In the video we saw, Soviet Ilyushin fighters joined American aircraft in fighting against a Japanese fleet. Allies can also provide resources for you to call on and control, including actual military units.

Another new feature introduced in Allies will be enhanced direct control. In the original Pacific Storm, you can exercise direct control over your units in battle, but this was limited strictly to turrets on ships and aircraft. Allies will let you take direct control of ships and submarines, so you can use the big guns on enemies as you play through the real-time tactical battles in the game. On the technical side, Allies will also add location-based damage to Pacific Storm. This is an interesting feature because if you can direct a torpedo, bomb, or kamikaze strike at a weak point on a ship (such as the ammunition storage areas), you can actually sink a large vessel with just a single critical hit. The graphics have also been tuned, so you can choose to fight night battles--this can alter the gameplay by making aircraft and air reconnaissance less effective.

Allies will offer three different multiplayer modes. There's a four-player battle planner mode that lets you use points to purchase and customize your fleets, place them on the map, and then jump into the game. There's an action mode playable for up to eight players that lets you control aircraft only. Finally, a cooperative mode for two players lets you explore historical missions in the game and fight against the computer with a friend in such pivotal battles as Pearl Harbor or Midway. Up to 15 cooperative missions will be available after they're unlocked by beating the appropriate skirmish mission.

Currently Pacific Storm: Allies is slated to release on the PC in early 2007. North American players will get to play the original this summer, but from what we've seen at E3, satisfied customers of that game won't have to wait long for additional content. 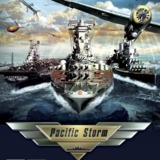