Two easy steps to fixing the Houston Texans: draft Reggie Bush and fire the owner. We accomplish one of the two in our hands-on look at EA's coaching sim.

LOS ANGELES--Our original look at NFL Head Coach back in March unveiled a game belonging to an entirely new genre for the EA Sports' NFL game juggernaut: the 3D sports-management sim. Playable on the show floor at the Electronic Entertainment Expo, we got a few minutes to spend with an updated version of the game, to see how far its come since our last look.

Honestly, 10 or 15 minutes with a game like Head Coach simply isn't enough time to get a feel for the depth that is the backbone of such a title, even in a demo version designed to give the player a taste of the major features. Still, we gave it the old college try, diving directly into the NFL Draft demo. Although we had some time to check it out in our original preview, slow loading times and multiple bugs (a normal aspect of a game that early in development) kept us from getting to far into things. Today, we were pleased to find that the game is running much quicker than before, whether through simulating through the various menial tasks of your created coach's daily schedule, or simply filtering through the massive amounts of information available at your fingertips in the game.

Entering the draft demo we were pleased to find out that the club we were taking control of was the Houston Texans, a team which, in the eyes of many NFL fans, blew it at this year's NFL Draft by drafting defensive lineman Mario Williams over former USC running back Reggie Bush. Determined to win back the hearts and minds of the faithful Texans fans in our virtual Houston, we wouldn't be making that same mistake twice. After skipping a few days ahead in the schedule to get straight to the draft itself, we were greeted with the helmet-haired visage of Mel Kiper, the famed ESPN draft analyst, who gave a brief rundown of the draft.

When the scene transported us to the Texans' war room, it didn't take us long to make our first pick--but not before we checked in with one of our assistant coaches, who suggested we take Ohio State linebacker A.J. Hawk. Umm, no thanks. With a few button presses, we managed to grab Bush with the number one overall. Interestingly, the New Orleans Saints chose Bush's teammate, quarterback Matt Leinart, with the next pick in the draft. Oh, what could have been...

One thing that hasn't changed since our last look is the huge amount of information available to you in the game. In fact, now that the game has been fleshed out more (producers said it's roughly 85 percent along now), we noticed individual scouting reports on nearly every player on every team you face in the regular season--a pretty cool feature and one that will likely be invaluable for the more hardcore virtual coaches out there. That said, the organization of all this information can still be a bit confusing—some menus are available through by pressing the directional pad in one of four directions, while others are available by moving through various objects in your office, such as the computer, the phone, and so on. Because of this, it's sort of tough to tell where you need to go to access what information but, considering the depth of data on hand, organization is almost sure to be a problem.

Having saved the future of the Texans' franchise, it was now time to take to the actual on-the-field demo, this time featuring the familiar recreation of the Super Bowl matchup between the Pittsburgh Steelers and the Seattle Seahawks. We had control of the Super Bowl Champion Steelers and saw many of the same features that were already in place in our initial look at the game, including the ability to motivate and discuss things over with players, either those on the bench or on the field. You can still break out your meetings to the entire team, certain positions (such as all the defensive backs, or all the running backs), or even individual players. Discussions can come in the form of strategy talks, where you give players very specific advice on how they should play for the next play, next series, or the rest of the game, or "motivations," where you basically chew them out (we liked that one a lot).

While you're talking things over with the players, the game continues behind you, so you might turn around and find that you've lost possession of the ball, or that your team has even scored on a quick drive. Should you wish to keep control of your gameplan, you can certainly call every play in the game--and the game does a good job of organizing your playbook well, even organizing plays based on your current position on the field, such as third and long, or fourth and short. Players who spend a long time in career mode will be able to pick and choose plays for individual games and organize them how they see fit, and even design new plays using the game's play creator. When on the field, you have a number of presnap options you can perform with your team, such as shifting the offensive line, assigning hot routes to receivers, calling an audible, and so on. That said, you can't spend too much time in this rather in-depth menu... That playclock is running after all.

In all, we're still cautiously optimistic about NFL Head Coach. We love the idea of EA Sports trying something new with their NFL license and stretching their creative muscle a bit. Whether the game will resonate with football video game players, however, who are used to a bit more action in their pigskin games, remains to be seen. NFL Head Coach is due for release in June, and we'll have more on the game in the coming months. 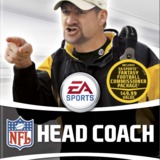