We pay a visit to THQ's E3 booth and find ourselves in a haunted house and armed only with a squirt gun.

LOS ANGELES--Earlier today, as we made our way through a busy THQ stand on our way back to the GameSpot booth, something caught our eye. That something was a PlayStation 2 demo of Monster House, a movie-inspired action game in which you'll assume the role of one of three children exploring a haunted house. Actually, the house isn't haunted per se; the house is a monster, but that's a story that will be best told in the upcoming movie.

The game caught our eye not only because it has an interesting visual style (which you can see for yourself in our screenshots), but also because both of the characters that we subsequently had a chance to take control of were armed only with oversized Super Soaker-style squirt guns. Water is apparently an effective weapon against many of the enemies that the house throws at you as you explore its insides, which today included flying books and some of the most aggressive furniture we've ever seen in a game. We appeared to have an unlimited supply of water at our disposal, but regular tapping of the reload button was required to pump the squirt gun and maintain pressure.

When we weren't defending ourselves from attacks from what might normally be considered inanimate objects, we were searching for items that we could use to solve basic key-and-lock puzzles in order to progress. These items included lightbulbs for a darkened hallway, a dusty book that fit into a hole in a wall, and…a key for a door. Many other doors in the game were blocked by water pipes and such rising up through the floor as we approached them, but after squirting all of the aggressive furniture in the room to death, the plumbing would retreat under the floorboards so that we could continue.

Look for more information on Monster House in the coming weeks and months. 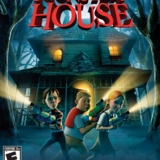