We take a look at the sequel to last year's charming role-playing game for the PSP.

Last year's Legend of Heroes turned out to be a solid, if not particularly original role-playing game, and one of the best yet on the PSP. Namco Bandai Games is set to deliver a follow-up with Legend of Heroes II: Prophecy of the Moonlight Witch, scheduled to be released in June of this year. We took a look at the sequel at a recent press event to see just how this game is different from its predecessor.

In terms of the story, Legend of Heroes II is completely unrelated to the previous game. The story goes that a beautiful woman lived in the world of Tirasweel. This woman had white hair that seemed to shine in the moonlight, thus the nickname, "The Moonlight Witch". Her mystique goes far beyond her luminous locks, though. The woman is able to see the future, for better or for worse. When blessed with good fortune the witch was revered, but when bad things happened, she was blamed and eventually she up and disappeared. The story follows a group of adventurers as they investigate the mystery of the Moonlight Witch and attempt to change the seemingly doomed fate of the world of Tirasweel.

The game looks and plays very similarly to the previous Legend of Heroes game. You once again walk about a world map that is filled with enemies, and when you bump into the enemies a battle is initiated. The enemies on the map are all color-coded so you can easily tell how well you measure up in terms of strength. Some enemies will go out of their way to avoid you if they decide that you're too strong, which is an interesting twist on the enemy AI you find in most role-playing games. The battles are turn-based, with the standard options for attacking, casting spells, and using items. There's also a special gauge that you can fill up by performing actions in battle. Once the gauge is full, you can initiate a super attack that inflicts major damage, which results in a one-hit kill more often than not.

The pet system returns from the first game, so you can once again have all sorts of cute cats and dogs under your care, although you can only have one pet at a time. The pets can help you out by finding items and providing assistance in battle, so it pays to keep them well fed and content.

The graphics and art style in Prophecy of the Moonlight Witch look the same as in Legend of Heroes. You play the game from a top-down perspective, which offers a good view of the surrounding environments. The settings are the usual forests, small towns, and so on, and they are nicely detailed and colorful. The characters are squat and deformed, but they look good as well.

We're looking forward to getting some hands-on time with Legend of Heroes II at E3. In the meantime, you can check out the recently posted screenshots on the gamespace to get an idea of what to expect from the world of Tirasweel. 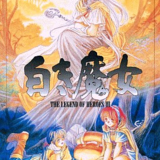 The Legend of Heroes II: Prophecy of the Moonlight Witch
Follow
$22.63 on Walmart
Buy

View Comments (1)
The Legend of Heroes II: Prophecy of the Moonlight Witch