Hard Rock Casino hopes to bring you all the fun of a casino, without all the old ladies hogging the slot machines.

LOS ANGELES--If you ever wanted to get your game on at the Hard Rock Casino, then its upcoming video game adaptation for the PlayStation 2 and the PlayStation Portable may be just your style. It marries 20 different casino games with a cartoonish sense of style for some engaging gambling-on-the-go...without the actual hit to the pocketbook.

We only had a chance to see one of the games in Hard Rock for ourselves--a low-stakes blackjack table--but graphically, the game looks pretty nice and the interface is intuitive enough not to get in the way of gameplay. With 20 different games to play, ranging from straight up Texas Hold 'Em to craps to slots to a sports book, of all things, you're definitely going to find something that tickles your fancy.

To get players to try out all of these different games, Hard Rock Casino is going to take a mission-based style of gameplay, where you start out as a rookie gambler and attempt to work your way up to high-roller status. Even if you don't have a lot of cash to shell out for a new casino game, though, Hard Rock won't hit you in the pocketbook too hard, as we're told it'll cost somewhere between $15 to $20 on both the PS2 and the PSP platforms.

Hard Rock Casino is currently slated to ship for both the PS2 and the PSP in October of this year, so stay tuned to GameSpot for more details as they become available. 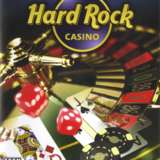