Classic franchise revived on next-gen consoles by developer Secret Level; action-RPG to be released in 2007.

LOS ANGELES--In early April, Sega announced that it had purchased Secret Level, a San Francisco-based developer, which would "re-create a classic Sega franchise." Up until now, the identity of said franchise was kept behind closed doors.

Today, the re-created franchise was revealed as Golden Axe, which is getting a second life on the PlayStation 3 and Xbox 360. Whereas the classic was a beat-'em-up, the new Golden Axe will be an action role-playing game and will appear sometime in 2007.

It's unclear as to whether the original game's stereotypical characters will be included in the new version, but the ability to ride on the back of beasts or take on foes on foot will return, as will the emphasis on balancing both brawn and magic.

Secret Level has a variety of games in various genres under its belt. Among them are America's Army: Rise of a Soldier, Karaoke Revolution, and Magic: The Gathering - Battlegrounds.

Golden Axe has not yet been rated or priced. 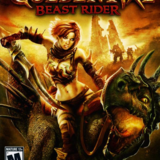