Michael Mann's 1995 crime film is getting the game treatment; Kilmer on board, De Niro and Pacino in talks.

LOS ANGELES--Though it was only a moderate success when it hit theaters in 1995, Heat has developed a devout cult following. Its deep characters, clockwork-like plot, and intense violence have earned director Michael Mann's three-hour-long crime epic many fans, more than a few of which are game developers. Indeed, the ultradifficult bank robbery level of Grand Theft Auto: Vice City was a direct homage to the film, featuring copies of the hockey-mask-and-coverall disguises worn in the beginning of Heat and re-creating its violent street-shootout denouement.

Now, it appears Heat will be getting a more direct game adaptation. Today, the hybrid entertainment company Titan Productions announced that it has reached a deal with Regency Entertainment, the Hollywood production company that owns the rights to Heat, to publish a game based on the film for "next-generation consoles" in 2007.

According to Titan Productions, Mann is in talks with Gearbox to oversee the game's development. There's also a good chance that many of the movies' stars will be lending their voices and likenesses to the game. Titan claims it is in "advanced stages with representatives for Robert De Niro, Al Pacino, and Val Kilmer to be part of the video game sequel."

According to a statement by Titan, Heat: The Game will be a prequel or sequel to the film. If the game is a sequel, De Niro's character, Neil McCauley, will appear in flashback, perhaps in the form of training missions. If Pacino declines to get onboard, it would be a sequel that would have a new detective chasing down McCauley's crew.

Though the prospect of a Heat game elicited whoops of delight inside the GameSpot E3 booth, Titan's record has been more than a little spotty. Clive Barker's Demonik, its next-gen game collaboration with Terminal Reality, was canceled in February. Little has been heard about its other movie-game crossover projects, such as Guillermo del Toro's Sundown and John Carpenter's Psychopath, since they were announced.

However, unlike other Titan projects, the Heat game has a well-respected studio on board--Gearbox Software, developer of Brothers in Arms and the PC port of Halo. "There is something about this concept that I call 'hardcore heist' that has never really been done well in a video game, yet everyone on the planet has thought about robbing a bank or something at one time or another," Gearbox Software president Randy Pitchford said in a statement. "Heat pretty much defined what hardcore heist means and it gives us a narrative mechanism to consider both sides." 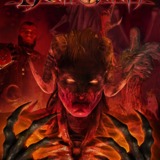