You dirty rat! You got Flushed Away! And we have a first look at your video game adaptation of the upcoming feature film!

LOS ANGELES--D3 is showing their title Flushed Away behind closed doors at this year's E3, and we had the opportunity to have it demoed for us by one of their kindly representatives. The game is an adaptation of the upcoming computer-animated film from Dreamworks Animation and Aardman Animations, the creators of Wallace and Gromit and Chicken Run.

The game follows the plot of the film, which revolves around the adventures of two rats in the sewers of London. Roddy is a high-class, upper-crust sort, who's transported to an unfamiliar world when he's flushed down a toilet and finds himself lost in the sewers without any method of returning home. Rita, on the other hand, is a sewer-dweller herself, and travels around on her makeshift boat, called the Jammy Dodger. As you control them, you'll have to take on the villainous Toad and his minions, who are intent on destroying all of the rats, as well as their sewer-based city, Ratropolis.

So that's the long and short on the plot, but what does that say about the game? Well, we had a few minutes to sit down and see it for ourselves, and you'll probably be unsurprised to learn that this is an action-oriented 3D game with platforming elements, as are basically all adaptations of children's films. We were able to get a look at a playable version of Rita as she traveled around a section of Ratropolis, which was crawling with security guards. There's a bit of a stealth element in parts of the game, and in this section it resulted in Rita being forced to stay out of the range of the guards' flashlights, lest they notice her and attack.

Ratropolis itself is nicely rendered on the PlayStation 2. The city is built from castaway human trash, so you'll see stuff like streetlamps made from old plungers and desk lamps or climbable lattices made from the plastic rings you get on six-packs of soda.

Each of the characters has their own special gameplay mechanic. We weren't filled in on what Roddy is capable of, but for her part, Rita has a little bungie cord that effectively acts as a grappling hook, letting her reach high points on the map or hang above the security guards as they pass beneath her. The game often saves checkpoints, and since it is going to be targeted toward a younger audience, you shouldn't expect a punitive level of difficulty; if you die, you simply get bumped back to your previous checkpoint. There aren't any lives to lose, so you can retry difficult areas as often as you need to advance.

Flushed Away, the film, is set to release sometime this fall, and D3 hopes to have the game adaptation ready to ship a week or two before it hits. Stay tuned to GameSpot for more details as the game gets closer to release. 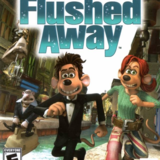