Nintendo puts a new spin on a classic concept, courtesy of the Wii and trucks.

LOS ANGELES--Nintendo is putting a new spin on a classic concept with Excite Truck, the upcoming racer for the Wii. If the name sounds a bit like Excitebike, the classic NES game, you'll find that's for a reason. The game uses the basic Excitebike formula and puts trucks in the mix. In the short demo we were able to try, the game offered a fun racing experience that made smart use of the controller's attributes. We tried a few laps in Mexico, the second of two courses (the first being Fiji) and were pleased by how the action handled.

The demo dropped you into a race against five other opponents and sends you off on a series of laps through an unruly dirt road that winds alongside and through mountains. To get ahead of the pack, you'll need to rely on your truck's boost, carefully coordinated landings from the many jumps you'll be making, and landscape-altering power-ups. To make this happen, you'll need to use the Wii controller, which isn't too tough to bond with. You'll hold the main controller sideways, with the D pad side in your left hand and the 1 and 2 buttons over in your right. The 2 button will serve as your accelerator, while the D pad will let you trigger your turbo. You'll steer your truck by moving the controller left and right--basically, imagine that it's a steering wheel. The interesting thing is that when you're airborne, as you'll often be, you can adjust your truck's pitch to ensure you land on all four wheels. If you manage that, you'll be rewarded by a handy no-strings-attached speed boost. This appears to be the preferred way to tear along the road, as your turbo can be costly if you rely on it too much since your truck can overheat. We found that getting airborne was pretty common on the Mexico track, thanks to its sloping layout. Better still were power-ups that you could drive through and would cause the landscape to warp, creating a temporary ramp you can use to catch big air. Landing on all four tires is pretty easy once you get the hang of tilting the controller backward or forward.

The visuals in the game were looking good and moved along at a good clip. The car design was solid, and the landscape had a fair amount of detail, some of which you could smash through. The effects for the speed boosts were flashy, as screen-warping fire effects helped underscore your fast rate of speed. The game featured a rich color palette that kept the dirt road and mountains from looking too bland, which was nice. Though the work-in-progress game was far from done, it already had a respectable frame rate.

Based on what we played, Excite Truck is shaping up to be a fun, arcade-style racer with good visuals. The gameplay is solid and accessible, making good use of the controller. Look for more on the game from the Electronic Entertainment Expo show floor later this week. 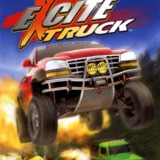