Nintendo and Inis team up to bring the DS some group cheer with their new twist on a Japanese import.

LOS ANGELES--It's been close to a year since a little import by the name of Ossu Tatakae Ouendan won us over with its combination of rhythm action and catchy J-pop. During that time we've hoped that the game would find its way to US shores somehow, although we were sure it was a pipe dream. Though fun as all get-out, the game was also fiercely Japanese--thanks to its manga art style, J-pop-heavy soundtrack, and its male cheerleader lead characters. We figured that all those elements, which formed the core of its appeal, would ensure the game would never see the light of day in the US. And we were right...well, sort of. At a recent pre-Electronic Entertainment Expo event, Nintendo showed off Elite Beat Agents, a rhythm action game from Japanese developer Inis that puts a new coat of paint on Ouendan for the US market.

The game puts a Western spin on the premise of male cheerleaders roaming the world and bringing help to those in need. The cheerleading theme is out and a Men in Black premise is in. You'll be following the adventures of a trio of "elite beat agents" who set out to help those in need. Yes, it's the same basic premise, but the agents have received a little bit of a masculine makeover this time around. The headbands, big hair, and flowing trench coats are out, and they've been replaced by pompadours, dark sunglasses, and slick suits. The trio will be dispatched by a gruff chief from their headquarters to go and help those having some difficulty in life. Thankfully, said "help" still takes the form of dance routines.

The demo on display featured two playable segments, a tutorial on the basic mechanics of the game and a level that finds you helping out a young girl in need. The tutorial, introduced by the chief, runs you through the basics of EBA's game mechanics. You'll see a series of numbered circles that you'll have to tap or rub in time with the music. A shrinking concentric circle will serve as your guideline, and it will alert you to when you can tap the numbered circle. As you progress through the game, the mechanic expands a bit to include dragging a circle between two points in time with an onscreen icon. Your taps will yield points that fill a dwindling energy bar that cycles between red and yellow at the top of the screen. If the bar runs down to nothing, it's game over. Though we didn't see it in the demo, another mechanic requires you to use your stylus to fill an onscreen gauge by spinning it on a wheel that appears on the touch screen.

The playable level followed the same flow as the scenarios seen in the Japanese game. You'll watch some manga-style still images across both Nintendo DS screens that will set up the scenario you're about to play. These story sequences will focus on a day in the life of an individual who invariably ends up screaming for help. Once that's sorted, the heroic trio appears and the still images are confined to the top screen, while the touch screen focuses on the gameplay with the dudes doing their routine in the background. In the demo, the action focused on a young babysitter who was aiming to have a day off with the object of her affection and trying to have a talk with him about their relationship. This is all put in jeopardy when her client pops by in need of some last-minute babysitting. The level finds you helping her juggle dealing with the kids and trying to have the chat with her football-obsessed and none-too-bright fella. As in the Japanese game, each song is broken up into different sections that you'll be rated on as you go.

The visuals in the game are on par with the import game's, albeit with more Anglo folks. Little has changed in terms of the manga art style for the still images and game graphics. The new character models are comparable to the Japanese games, although they do look a touch more subdued due to the design changes we mentioned earlier.

The music in the demo reflected the Western direction the game is going in. Rather than use the bouncy J-pop from the original game, the demo featured "Walkie-Talkie Man" by Steriogram. The peppy tune fit the gameplay and offered ample opportunity for some unique combinations on the touch screen.

Based on what we played, Elite Beat Agents is looking like it's going to be an interesting title for the US. Anyone who imported the Japanese game may well be mortified by the Western makeover. So much of the original game's appeal was tied to its male cheerleader novelty, Japanese aesthetic, and its music. However, the concept is still addictive and should work well if the music manages to have the same zip that the Japanese tunes did. Elite Beat Agents is slated to ship later this year for the DS. 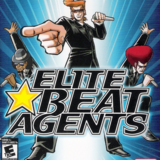