This unique little Nintendo DS role-playing game from the creative genius behind Killer7 is playable at E3. We tried to wrap our heads around it.

LOS ANGELES--One of many interesting and very Japanese games on display at Atlus' booth space at the Electronic Entertainment Expo is Contact, which seems like a standard role-playing game from a very cursory glance but seems to have many unique touches to it on closer inspection. The game combines retro-style 8-bit graphics together with the look of traditional 16-bit console RPGs and features an unusual "trick seal" system that lets you peel off and slap on magic stickers to make strange effects happen. The game "shatters the fourth wall entirely," according to press materials. What else would you expect from SUDA-51, the mind behind Capcom's completely mind-boggling Killer7, who has aided in the production of this game?

Contact begins with you staring at a professor working away at some strange programs. Nothing happens--he keeps working away. So we poked him and got his attention. He addresses us directly, asking our name, our favorite food, all kinds of things. It's hard to tell whether all this is important or just small talk, since the professor is quite an affable guy. But then the tone becomes serious for a moment. "They're after me," he admits. Who, exactly? And then it becomes clear that the professor's lab is actually a sort of space ship. And it's under attack. Meanwhile, a boy and a girl cross paths...and something happens. Contact's story is quickly compelling but as strange as you might expect from SUDA-51.

The space station gets shot down and crash-lands on a tropical planet of some sort, and at this point, we took control of the boy character. Outside of the space station looked just like the inside of a pirate ship, which was odd, but we kept going past the ship and onto the tropical island, which was filled with some semi-dangerous critters. Here we figured out the combat system, with the professor's help. You simply toggle between running and combat stance. When in combat stance, all you need to do is approach an enemy to start attacking it. Special attacks are available, such as a basic power punch you get at first, which offers a great description: "Go straight for the liver!"

We didn't spend a great deal of time fighting in the 30 minutes or so we spent playing through the beginning portions of the game, but we did get to use the trick seal system a little. We also got an alternate outfit, that of a blue-clad ninja. Different outfits seem to grant the boy different special abilities. Reportedly the game also lets you "meet your friends with the Wi-Fi connection," but it isn't clear exactly how that works--an Animal Crossing sort of thing?

Contact has a unique look to it, but it's difficult to get a great sense of a game that's presumably fairly long and involved in an environment like the Electronic Entertainment Expo. We contemplated stealing the game multiple times and playing it a lot more if that's any consolation, though. It seems very interesting, and we'd expect no less from the creator of Killer7. Contact is apparently almost complete, so stay tuned to GameSpot for further coverage. 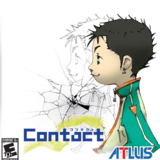