Mining droids have gone rogue on a mysterious asteroid, and it's up to you to clear them out and find out what's going on.

LOS ANGELES--Alpha Prime is a first-person shooter with a decidedly sci-fi theme, and it's the brainchild of Prague-based Black Element. The game, built on Black's Enforce 2 engine, is certainly pretty, but it also wants to tell a story. Black brought on Czech sci-fi author Ondrej Neff to pen this tale of an illegal asteroid-mining base filled with homicidal robots.

In Alpha Prime, your character is summoned to help out a friend caught inside the mining facility. Before too long, you'll be battling mining robots gone rogue, and you'll be trying to work your way deeper into the facility to find out what's going on. The game has 10 levels in it, and it features a mix of stealth gameplay and run-and-gun-style action. It'll be important to use the environment at all times, as you can hack into computer systems and override various devices. For instance, tap into a camera and you may see the inside of a heavily patrolled room. Wait for a robot to enter into the field of fire of a defense turret, then tap into the turret and unload on the robot.

If all else fails, you can try blasting your enemies. The action looks very nice, and the Enforce 2 engine delivers some great atmosphere. And no sci-fi shooter would be complete without some form of bullet time, and rest assured that there's a special compound in the game that can give you super speed. The game also has support for Ageia's PhysX processor, so you'll experience bigger explosions and more complex physical effects, if you have the card. Alpha Prime is single-player only, unfortunately, but apparently that's so Black could focus on the gameplay. The game itself is due out in the third quarter, and Black is considering online distribution at this point. 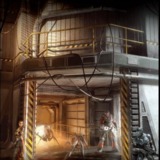