Take on the role of the villain in this Dungeon Keeper-inspired strategy game.

To describe Dungeons in its simplest terms--it’s a game heavily inspired by the Bullfrog classic strategy game Dungeon Keeper. From top to bottom, you’re in complete control of your very own dungeon, playing as the dungeon lord who acts as your dungeon’s main guardian. You can maneuver him through the dungeon using the standard WASD keyboard control format and give orders to minions using the mouse. In the first part of the demo we saw, the dungeon lord is venturing back to his part of the underworld when he stumbles across some heroes.

Confrontations with heroes are at the heart of the entire Dungeons experience. But before we get into the details, you should know that battles happen automatically, and you don’t have any direct control over specific actions. However, the outcome of these battles is heavily influenced by the dungeon lord’s individual attributes, which in turn, are augmented by the prestige of your dungeon. Dungeon prestige is affected directly by how well you’ve adorned and designed your dungeon--adding even one of the numerous decorative objects (called gimmicks), like lamps, affects your prestige level.

But back to the heroes... There’s an interesting dynamic at work when it comes to the noble people who infiltrate your abode. When a hero comes into your dungeon, you’ll see icons over his head that indicate what he’s interested in doing while venturing through your dark lair. The sword icon means that he’s thirsty for battle, while the treasure-chest icon means he has a hankering to pilfer some gold. In fact, the very first hero who entered the dungeon through the hero gates went directly for the treasure room built by the dungeon lord for this demo. As you watch him collect gold, you’ll see that his interest level in performing that activity diminishes since he’s getting his fill. This creates another problem, because you need to keep him occupied with something else in its place. In this case, since he wants to do battle, a good idea would be to create some monster spawn points so he has something to fight. If the hero becomes too bored, he’ll start venturing deeper into the dungeon, and he'll eventually reach the dungeon heart. If the dungeon heart is destroyed, the game ends. But you can also counter such an attack by attacking the heroes yourself, but it’s always a good idea to keep an eye on the heroes’ skill level--in some cases a high-level hero (they can reach level 20) may venture into your dungeon.

At some point, you’re going to have to confront heroes to harvest soul energy, which functions as the second resource in the game behind gold. When you defeat a hero, you capture some of his soul energy, but in some cases, you won’t be able to capture all of it--that is, unless, you build a prison cell area inside the dungeon where you can squeeze the extra bit of soul energy from him. We watched the dungeon lord construct a prison area with the help of his little goblin minions (that typically run for their lives when a hero is nearby) and then click on the fallen body of the hero, and then we saw him appear in one of the cells. The dungeon lord then took his souls and used them to add a few more nice-looking lamps to the dungeon walls.

The next portion of the demo took us into dungeon-versus-dungeon combat. The dungeon lord’s goblins had been digging a path to the east, and they opened up a passageway to another dungeon controlled by the zombie lord--as indicated by the circle of influence surrounding his dungeon. As soon as the wall broke, the zombie lord charged in with his skeleton minions and began attacking the dungeon lord. Fortunately, the dungeon lord won the fight, but if he had been killed, he still would have had time to respawn at the dungeon heart and protect it--though doing so risks serious damage to the heart.

The demo ended as we saw the dungeon lord control not only his original dungeon, but the zombie lord’s dungeon as well. Dungeons will feature around 20 campaign missions in three varied environments, ranging from the one we saw to a Mayan-ruins-styled area and finally hell. Unfortunately, the game won’t ship with any sort of multiplayer component, but the development team hopes it can add such functionality via a patch or possibly even an expansion somewhere down the line. Dungeons is currently scheduled for release early next year, and we’ll be sure to bring you more details. 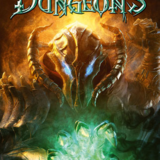