Turbine Entertainment, developer of the Asheron's Call franchise, today announced that it has opened sign-ups for the alpha testing of its forthcoming online role-playing game, Dungeons & Dragons Online. The game is the first massively multiplayer online RPG based on the fantasy game from TSR and Hasbro subsidiary Wizards of the Coast, and it will be released in the second half of this year. Atari will be publishing the game in North America and Europe, and Turbine will publish localized versions in Asia.

The alpha testing, which begins in "the near future," will give gamers a chance to get a sneak peek at the game's fantasy world if they meet Turbine's requirements. A limited number of players will explore the realm of Stormreach with created characters from D&D races, such as elves, dwarves, and humans. More players are expected to be added incrementally.

Gamers looking to get in on the alpha testing should head over to Turbine's registration page. For more information on Dungeons & Dragons Online, check out GameSpot's previous coverage. 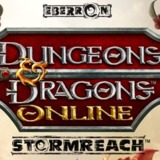