We get to see David W. Bradley's latest role-playing game in action.

Looking at it, Dungeon Lords appears to be a rather fast-paced action game where your character runs around the world slaying monsters left and right. But beneath the flashy graphics is the heart of a deep role-playing game, designed by David W. Bradley, a noted RPG designer for almost 20 years.

Dungeon Lords is his attempt to create an action RPG, but it’s also one that’s designed to hide all the stats and interface conventions of regular role-playing games. You see that by immediately looking at the game, because the screen is clear of clutter, and save for a small health bar in the upper left corner, there’s nothing else between the player and the action.

In the game, you’ll use the right mouse button to block attacks with your shield, while your left mouse button will attack with your current weapon. It’s fairly simple, but you’ll be conducting complex combo attacks as your character gains experience. The action is fast, smooth, and well animated, and you’ll go up against everything from little goblins to giant lumbering trolls--and everything in between.

The graphics are quite nice, with beautiful animation and lighting effects. It’s quite a step up compared to Bradley’s last game, Wizards & Warriors. Bradley said he wrote the engine from scratch, and it certainly looks good enough to compete against the rest of the field.

The game will feature eight playable races--five humanoid and three monster-based--and eight different player classes, including fighter and thief. You’ll be able to dual or multiclass in the game, so your character’s skill set can be quit broad or very focused, depending on how you choose to play.

Bradley estimates between 40 and 50 hours of gameplay in the single-player campaign, which is also playable cooperatively in multiplayer. Add to that player-versus-player multiplayer, and there’s a lot of potential playing time in the game. Dungeon Lords will ship this fall, and DreamCatcher is still investigating the possibility of an Xbox version with support for Xbox Live. 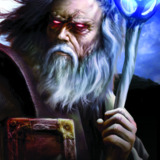