Long forgotten in the annals of history--that is, the late '80s--Hudson Soft released a game for the fledgling TurboGrafx-16 called Dungeon Explorer. This was an early, class-based dungeon-crawling action role- playing game not too different at its core from the Diablos and Titan Quests that you still see today. Hudson has apparently been planning a revival of the Dungeon Explorer franchise for a while, starting with the release last year of the original game on the Wii's Virtual Console service. Now the company is prepping a new portable installment subtitled Warriors of the Ancient Arts to debut next month.

The PSP and DS versions of Warriors of the Ancient Arts are actually entirely separate games, with different but similar storylines. However, they naturally share a number of mechanics and themes. On the PSP, you're fighting in a kingdom that's been equally beset in recent years by internal strife and the strange appearance of monsters terrorizing the land. Luckily, the human-on-human violence tends to get put on hold when the monsters ramp back up, so you'll head into various dungeons and other unpleasant places to battle the hordes with multiple comrades in tow. The DS game depicts a demon king who has been magically sealed in a pyramid but who is nevertheless controlling monsters that are rampaging through the kingdom (noticing a pattern here?). You'll have to discover various ancient fighting arts to brave the unknown reaches of the pyramid and dispatch the demon lord once and for all.

The PSP version of the game gives you a greater number of classes to choose from: fighter, hunter, monk, thief, shaman, and bishop are all on offer. You can also choose among three races: the humanlike izark, the elven ist, and the olff, which is a sort of scaled lizard man with horns and a tail. Of course, your choice of class will primarily determine the sorts of abilities you have in battle, though your racial selection will also have some bearing on the amount of hit points and such that you receive. The game's leveling works on a point-distribution system, whereby you can dump new points into categories, such as strength, intelligence, and luck. Each class will have a number of special attacks to use, and then you can team up with your allies in some situations to perform tandem attacks, as well.

There are no touch-screen controls in the DS version; you'll control your guy with the ol' D pad and buttons (remember those?). The DS version has only three classes (warrior, hunter, and mage) in contrast to the PSP's six classes, and its three races all appear basically humanlike (though they do affect your stats differently). Strangely, you won't gain human companions here. In the world of the DS game, people use ancient automatons discovered via archaeological means as servants and helpers, so instead of hiring or recruiting living comrades, you'll simply shell out some cash to buy a few robots that can fight alongside you. The game also offers a number of different fighting "schools" associated with different animals that you can study in to learn new techniques. You can focus on one school to achieve more advanced techniques or dabble in several disciplines to acquire a broader repertoire of attacks.

Neither of the new Dungeon Explorer games is going to win any beauty pageants on their respective platforms, but they both seem to have a good bit of depth to their mechanics. Both versions of Warriors of the Ancient Arts are slated to ship next month, so wait for the full review to find out just how much depth. 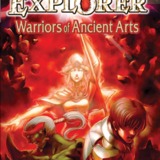