DuckTales: Quackshot Is An April Fool's Day Prank, But It Started As A Real Pitch

The developers of Monster Boy played a cruel prank with an amazing-looking DuckTales game concept, but there's a good reason why it looked so polished.

April Fool's Day 2020 has been and gone, and as usual many studios have gotten in on it with fake announcements. But one prank in particular seemed very cruel, because the game announced looked both very good and extremely plausible--Ducktales: Quackshot, from Monster Boy developer FDG Entertainment. But there's a reason why it looked so professional--it was the result of a real pitch made to Disney.

In a follow-up tweet, in which the studio announced that the game was just a prank, FDG Entertainment clarified that while the game was not happening, it was not for lack of trying. "We worked hard on a legit pitch to Disney but unfortunately never got the license," the tweet reads. "It would've been a shame to bury the material so it became this years #AprilFools. Maybe someday Disney will reconsider?"

Thank you for the overwhelming feedback on our #DuckTales Quackshot screens. We worked hard on a legit pitch to Disney but unfortunately never got the license. It would've been a shame to bury the material so it became this years #AprilFools. Maybe someday Disney will reconsider? pic.twitter.com/oLzikKds4u

The concept art captures the style of the Ducktales reboot cartoon, starring David Tennant as Scrooge McDuck. Season 3 of the show begins on April 4.

It's possible that FDG Entertainment posted this as an April Fool's Day prank so that Disney could see how sincere the enthusiasm for the game was--the announcement tweet received over 7600 likes.

If you're after a DuckTales game, DuckTales: Remastered recently returned to digital stores after being removed last year. 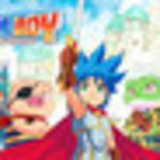