The Nintendo DSi has been on sale in Japan only since November, but it's already getting a trio of new colors added to its palette. Today, the hardware maker said that as of March 20, Japanese gamers can pick up the newly redesigned handheld gaming unit in pink, green, and metallic blue, as well as the black and white original hues. As with the currently available DSi, the newly colored handheld will retail for ¥18,900 ($194).

Demand for the DSi has been strong in Japan since Nintendo launched the third iteration of its current-generation portable. In the handheld's first two days on the market, Japanese gamers picked up more than 170,000 units, a number that had ballooned to more than 535,000 by month's end, according to Enterbrain. Through the end of 2008, all three versions of the handheld--2004's Nintendo DS, 2006's DS Lite, and 2008's DSi--had combined to sell more than 96.22 million units globally.

The DSi is expected to launch in the US on April 5 at a $169.99 price point--$40 more than the currently available DS Lite, which Nintendo plans to continue to sell after its successor's release. The device will initially be available in both a black and a bright blue hue (pictured, bottom). Nintendo's portable will go on sale in Europe on April 3, with an Australian rollout expected April 2. 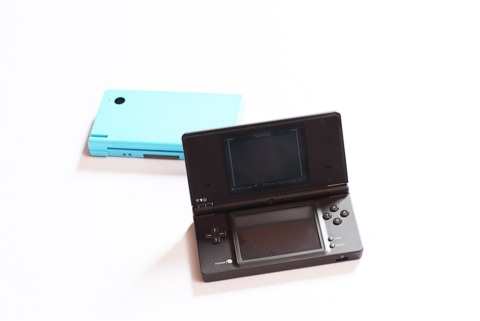 As cause for the inflated price, the DSi features a .3-megapixel camera, a smaller inward-facing camera, photo editing software, an SD card multimedia storage slot, a Web browser, and music playback, as well as larger and brighter dual screens. The new functionality comes at the expense of the Game Boy Advance cartridge slot, which is absent altogether.

For more information, check out GameSpot's hands-on with the Japanese edition of the DSi.