The DS sales numbers keep coming in, and they're still good for Nintendo's new portable. However, there is one problem--they may be too good for Japanese gamers trying to buy one.

Only a few days after Nintendo announced sales figures for the DS in America (nearly 4 million units), Nintendo of Europe today chimed in with its own regional tally. The DS has sold roughly 3.5 million units in Europe since its debut in March, bringing the global total to almost 13 million.

Like gamers in other regions, European gamers were gaga for Nintendogs, taking 1.6 million copies of the game for a walk. The recently released Mario Kart DS is also off to a fast start, selling 800,000 copies since its late November launch.

Nintendo's DS continues to sell well in its home country with more than 5 million sold--but that may slow down as available units are becoming scarce. On its Japanese-language Web page, Nintendo has issued an apology to gamers trying to get in on the DS action. A rough translation explains that stock of the item is low and that more DSs are expected to be in stores in late January. 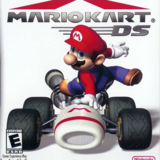