SAN FRANCISCO--Only the most rabid gamer can say that there aren't enough Mega Man games in the world today. The Capcom hero, known as Rockman in Japan, has sold more than 26 million games ever since making his debut 20 years ago in Mega Man.

The proliferation continues, as Capcom revealed Mega Man ZX Advent before the press yesterday in San Francisco. The game is exclusive to the DS and is making its way to retail in October for $29.99.

Mega Man ZX Advent is a traditional action game reminiscent of past installments in the series. The game follows Grey and Ashe, two heroes with overlapping stories that are set in the middle of a war between humans and robots. The two protagonists can change forms thanks to the Biometal system, which will come in handy when facing the game's several bosses.

That's not all the Mega Man DS owners will be getting this year. Capcom also confirmed that the previously announced DS game Mega Man Star Force--available in Dragon, Leo, and Pegasus editions--will be in stores this August for $34.99.

For more on the latest Capcom news, read GameSpot's coverage of the . 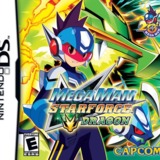