Crowd-funding drive for Dreamfall Chapters ends up with almost double its target.

Dreamfall Chapters: The Longest Journey is set to be released in November 2014 and will continue the storyline of series protagonist Zoe Castillo. The game is a 3D adventure built in the popular Unity engine and will be released for the PC, Mac, and Linux.

"Dreamfall Chapters takes players on an epic journey -- from the dystopian cyberpunk future of Stark, through the mysterious and dreamlike Storytime, to the magical landscapes of Arcadia," reads the game's Kickstarter page.

There will also be an interactive digital graphic novel released, which recaps the events of the first two games.

Funding was not enough to meet the $2M stretch goal for an entirely new 2D point-and-click adventure titled The Longest Journey Home. "But even if we don't reach that lofty goal this time around, we hope to some day still be able to tell this story," says the game's Kickstarter page. 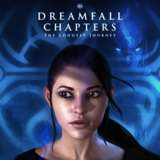