Japanese gamers have long been known for having a broader spectrum of taste than their overseas counterparts. Quirky titles like dating simulations and train-conducting games would likely never find a profitable audience in America, but in Japan they're kept afloat by the average gamer's willingness to accept oddity. Dream Coaster is just such an offbeat title. The game is known as Jet Coaster Dream in Japan (where it's been out for quite some time), and Xicat Interactive is banking on Dream Coaster's straightforward appeal and simple play mechanics to generate interest when it releases the game in the States this fall.

Dream Coaster allows you to build exactly that: your dream roller coaster. The story goes, simply enough, that you've been contracted to design roller coasters for a theme park, and you've been given a CAD-like interface with which to do so. It's a concept that has been done before, but Dream Coaster will no doubt be the best revision of the coaster-building idea so far, thanks in part to the Dreamcast's graphical capabilities.

The meat of Dream Coaster's gameplay is in the design phase. During construction, your roller coaster is represented on a grid as a simple wireframe model, and you can view your design from a variety of angles. Laying a new segment of track is as easy as setting variables like slope and tilt and then pressing a button. Since the limitations of the Dreamcast controller would likely make implementing roller coaster staples - like corkscrews and loops - tedious and time consuming, many prefabricated track pieces are also provided. Dream Coaster takes the laws of physics into account, so abandon your ideas about an entirely vertical coaster. Still, some wild designs are possible.

There wouldn't be a whole lot of fun in a game like Dream Coaster if you didn't get to examine your creation firsthand, and that's exactly what the game lets you do. After you're done building your coaster, a test run renders the track in full 3D, allowing you to experience the visceral thrill from a first-person view. Afterward, Dream Coaster will rank your track based on a variety of criteria, from its physical properties (like the G-forces involved) to its ability to please the crowd. Wow enough roller coaster fans with your track and you'll move on to the next of the game's five levels, and each level gives you more tools to work with.

Dream Coaster is slated to appear in the fall of 2000, so if you're looking for a unique game experience that you won't find in the flood of average action and sports games, look for it then. If the game catches on, perhaps we'll also see its recently announced Japanese sequel over here in the future. 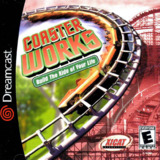