Sweden-based Idol FX is working on a third-person action game that's tied into a comic of the same name. The fact that the game's 3D visuals use a cel-shading effect enhanced with "rim-lighting" only helps make the game-comic connection seem natural. The overall style of the game could be described as "John Woo meets the animated Batman series," and you can expect it to be as over-the-top as it is stylish.

The grim yet colorful premise follows the decimation of the 99 Dragons Clan. Drake was a member of the Hong Kong-based clan who was a victim of the carnage, but in a supernatural twist he's been brought back from the dead to complete a mission. Drake must retrieve an ancient artifact stolen from the clan that can trap the souls of the living and resurrect the dead.

The third-person action will have you wielding dual weapons and exercising Drake's hand-to-hand martial-arts skills to take down crowds of enemies. In the middle of the action, you'll have to frantically collect souls, which restore your health and you need to keep away from your opponents. Drake is capable of larger-than-life acrobatics and can do flying somersaults over any objects his enemies' might use for cover, with both guns blazing. He has other special moves up his sleeve and has an ability that can be activated once to put the world in slow motion or twice to completely freeze his surroundings.

Drake will make its first public appearance at Majesco's E3 booth. It's scheduled for release on the Xbox and PC at the end of 2003. 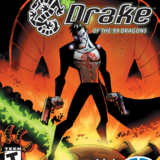 View Comments (0)
Drake of the 99 Dragons