But will it come to the west?

Capcom's Dragon's Dogma Online, a free-to-play role-playing game for PlayStation 4, PlayStation 3, and PC, has reached 1 million downloads in the 10 days following its launch in Japan at the end of August. Capcom announced the milestone today, also noting that players have created 370,000 characters as of Sept. 9.

In other news about the Dragon's Dogma series, Capcom this week confirmed that a PC edition of Dark Arisen is in development. 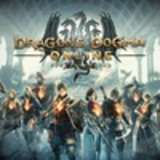