We take a long look at a playable version of 3DO's upcoming dragon simulator.

We first previewed Dragon Rage several months back. Back then, we were immediately impressed by its instantly accessible mechanics, as well as its insane pace. We'd hoped that its aesthetic presentation would eventually catch up with its tight mechanics, but if the latest version we've seen is any indication, 3DO still has a lot of work ahead of it.

Dragon Rage puts you in the role of Cael, a young dragon with a huge responsibility: to save his remaining kin from slaughter and bondage at the hands of the orcs. In Cael's world, the wholesale enslavement of dragonkind happened long ago, the once proud beings now reduced to the role of beasts of burden. Well, at least the lucky ones. Many are systematically "processed"--their heads are cut off, and their bodies are immolated in pits of lava. Cael was close to being put through this process, but, with his head literally on the chopping block, ancient power began to course through him. Mustering every last bit of it, he spewed flame on the orc technician at the controls of the foul device and thus freed himself. All of this is communicated by the game's opening cinematic.

What follows is the game's tutorial segment, in which you'll learn to use all the abilities that come with being a dragon. Essentially a free-roaming 3D shooter (albeit with a good many twists), Dragon Rage is definitely one of the more compelling draconian experiences available in the interactive realm. You're given a wide range of satisfying powers, and your range of motion is brilliant. Aside from the sometimes glaring absence of a real claw-claw-bite attack routine, your onscreen dragon does everything you'd expect it to--unleash all types of breath weapons, tear the flesh off enemies, and wield a healthy bit of dragon magic. All of this is powered by a smooth control scheme, which gives you ready access to all of your maneuvers and attacks.

Your primary weapon will be your breath weapon. This you unleash with the X button, and, depending on which element you're currently using, it will take a variety of forms. Elements take the form of jewels hidden, or otherwise scattered, throughout the gameworld. You can have only one active at a time, though you will often have a choice of which one you want active--many levels have several hidden within. The square button, in any event, enacts your "dragon magic," whose specific effects are similarly sensitive to your current element. When using fire, for instance, you're able to spew superpowered versions of your regular fireballs. Ice, on the other hand, will erect on you a cool reflect shield, which repels enemy attacks right back at them. Your most powerful attacks, however, are mapped to the triangle button, and the way you earn the right to use these counts among the game's most amusing mechanics. They're called "rage" powers, and they're really limited-use deals. Basically, they're earned by eating cattle--just one of the creatures (orcs included) that you'll be able to eat for health and mana. Eat five cows, and a shrine will activate somewhere on the map. Dip your face in the shrine, and you'll be granted a rage power. Up to 15 cows can be eaten in this constructive manner for a maximum of three rage points that you can hoard. The effects of these rage powers are not unlike smart bombs in that they demolish most everything in sight. The precise effects, again, depend on the element whose effects you're riding. Air will unleash mad thunderbolts, while fire will summon forth searing flames and such.

You're armed with a host of auxiliary abilities as well. Eating creatures, as mentioned earlier, will replenish all your relevant immediate statistics--both health and mana. You gain health by eating the various creatures that inhabit the world--swine, cattle, and the orcs' saurian mounts, among others. Eating the orcs themselves will net you mana--the logic, presumably, that snuffing out their dark souls somehow invigorates your own pure one. When you hit the circle button, your dragon will begin to snatch and chomp at any living thing in sight. You'll see kibbles and gibs fly out from the feast, which forms one of the game's more lovable moments when coupled with the endearingly rough animation sequence that accompanies the action.

Rounding out your beast are a group of movement abilities, which make up a standard set. The L1 and R1 shoulders allow you to strafe, while L2 and R2 will enact a 180-degree turn and a loop-the-loop, respectively. R3, finally, allows you to hover in midair, and, given its place in the control layout, it will become a much-used action. You'll use it, for instance, to make quick stops, which, as you're allowed to attack while thus suspended, will have a distinguished place in your offensive portfolio.

And given the nature of much of the game's level design, this sort of stop-and-go strategy will be pretty practical. In essence, Dragon Rage's levels are sprawling, mountainous affairs, jam-packed with scurrying orcs, their armed fortifications, and the war machines that defend them. Think of the classic Rampage, with a flying creature as the focus, and the environments populated by the sorts of armies you're used to seeing on miniature tabletop fantasy wargames, and you'll be really close to what Dragon Rage is going for. You're constantly in motion, blasting structures, eating things, and dodging all kinds of deadly projectiles. The pacing is really this frenetic. It's also no secret that Dragon Rage is informed by the conventions of strategy gaming, whose influence is apparent in many of its areas. The presence of orcish captains will affect how grunts perform, and, to safely proceed through certain areas of certain maps, you'll have to circumvent force fields by acquiring certain power-ups--or by destroying the structures that generate them. Granted, the strategy elements are either decidedly light or understated (or both), but, given the game's pacing, anything else would have been maddening. Still, though, there are times when you'll have quite a bit on your mind.

Dragon Rage definitely has the makings of a memorable experience. Indeed, at this point, the only thing that separates it from most first-tier productions is its comparatively sloppy graphical presentation. The last version we received doesn't look too much different from the build we saw several months ago. The dragon itself is for the most part well modeled, but it has a bit of a way to go in terms of animations. The game's draw distance is amazing, but this seemingly comes at the cost of texture detail; the environment textures are extremely low-res, and they're heavily repeated throughout many environments. The creature animations--aside from the dragon's--are almost nonexistent. There are some pretty cool environmental creatures flying about in some areas, and it almost seems like these got more attention than the ones on the ground. Granted, we don't need to see every single link in an orc's chain-mail shirt, but, if their animations were just a bit livelier, they'd look a lot more compelling. The effects are for the most part satisfying, but, just as with the rest of the production, they look very first-pass. On the other hand, quite a bit of attention has apparently been paid to the game's prerendered cutscenes. They're very glossy, as well as pretty long and suitably toned. We're just concerned that they were worked on in lieu of the actual in-game presentation. Hopefully not, though--and remedies for all these kinks are on 3DO's queue. If such were the case, Dragon Rage would definitely count among this year's more compelling games.

Regardless, there seems to be a lot to like about Dragon Rage. The next month will definitely be pretty crucial in the game's development. It's due for release on December 4, so look our way then for a full review. 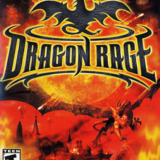