The 3DS MMO will require you to be online in order to play.

While Dragon Quest fans continue to await news regarding an international release of the latest game in the series, Dragon Quest X, Square Enix has announced that the MMO is coming to a new platform in Japan later this year. The newly announced 3DS version is set for release in September, and to make it possible, the game will run using a streaming system.

Similar to the Android version that's already available, you'll have to be connected to the Internet with your system in order to play. As the vast majority of the game already requires an online connection, this is not as much of an impediment as it might seem at first blush. One of the upsides to this system is the fact that players will be able to play alongside those playing on other platforms, including Wii, Wii U, and PC. This also means 3DS owners should expect a relatively comparable experience (screen size aside), although the game's use of the touchscreen is, shall we say, underwhelming.

There is still no official word on DQX ever making it out of Japan, where it was originally released in 2012 on Wii. (We're still waiting on an international release of Dragon Quest VII on 3DS, too.) Earlier this year, Dragon Quest creator Yuji Horii revealed that the next game in the series is in development, though he didn't say whether that would be Dragon Quest XI or a spin-off or some sort.

Are you still interested in DQX, or after such a long wait, do you no longer care if it's ever released internationally? Let us know in the comments. 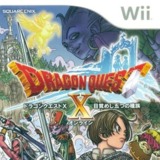