TOKYO--Square Enix announced last week that it is developing "Dragon Quest & Final Fantasy in Itadaki Street Portable" for the Sony PSP. The Japanese RPG powerhouse put up a teaser page on its official site, but specifics about the game were few and far between. That changed this week, as the latest issue of Shonen Jump includes a number of details about the project.

Back in late 2004, Square Enix released a PlayStation 2 board game named "Dragon Quest & Final Fantasy in Itadaki Street Special" in Japan. The game featured an all-star cast of characters from the two RPG series, and it was one of the publisher's major hits in the country for the year. However, Itadaki Street Portable for the PSP will be a new installment rather than a port of the PS2 original.

Itadaki Street Portable looks similar to the PS2 version of the game, but it features new characters and new stages. Square Enix has already confirmed the appearance of new characters from Final Fantasy XII (with Fran and Balflear playable for certain), and Shonen Jump reports that the game's new stages will include a map based on the Phantom Train in Final Fantasy VI.

Dragon Quest & Final Fantasy in Itadaki Street Portable is slated for release in Japan this spring. 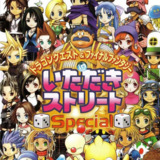