Goku is after those Dragon Balls again, but this time, it's on the Nintendo Wii.

Even after all these years, Goku, the feisty monkey-tailed boy hasn't lost his charm. Dragon Ball: Revenge of King Piccolo revisits the original tale, starting with Goku's quest to collect the seven Dragon Balls before the members of the Red Ribbon Army collect them. We stopped by Namco Bandai's booth at the 2009 San Diego Comic-Con and got to spend some time with this Wii-exclusive action platformer.

This is the first time that the Dragon Ball story arc will make it to the Nintendo Wii, and Namco Bandai is taking advantage of it by creating a good-looking 2.5D action game. Last year's Dragon Ball: Origins on the Nintendo DS was more of a Zelda-like action adventure game. As you progress through the stages in Adventure mode, you're basically side-scrolling but with the freedom to maneuver around the terrain a bit and pound enemies as you would in a beat-'em-up. It's like a 3D game on rails, so you'll have to watch for enemies that jump out and attack from the background.

As the spiky-haired Goku, you use the A button to attack with a giant pole and the B button to jump. You can ground pound by pressing A in the air, and once your ki bar is full, you can unleash your powerful kamehameha across the screen to show those Red Ribbon Army chumps who's boss. Some enemies will fire missiles at you, which you can target and then kick right back in their faces. But you won't just be furiously button-mashing your way to the Dragon Balls because you'll have to use some skill and brain power to figure out how to take down big bosses and even solve some environmental puzzles to get through the stage.

Like in the story, the Revenge of King Piccolo has a World Tournament mode in which you can play as Goku, Piccolo, Master Roshi, or other characters from the Dragon Ball universe and compete against a friend. This is set up like a fighting game, so if you want to take a break from the platforming, you can take out your frustrations on an opponent instead. Another feature from the main menu is the shop. As you're collecting zeni and other equipment in the main game, you'll be able to shop from the main menu to purchase items to help Goku on his quest. For those who aren't as familiar with the series, a gallery is available for you to brush up on your Dragon Ball literature and check out samples of the voice acting, of which there is plenty in Revenge of King Piccolo.

We enjoyed our time with Dragon Ball: Revenge of King Piccolo on the Comic-Con show floor. The cel-shaded graphics gave the game a clean and vibrant look. Even though the beginning levels started to look the same after a while, it still looked great, and the mindless button-mashing gameplay was fun. Look for Revenge of King Piccolo when it is released later this year. 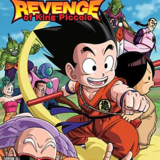