From GT, Legends is adding Omega Shenron and Super Saiyan 4 Goku. Shenron was the final villain of the Dragon Ball spin-off series, and now players of the mobile game can unleash his fearsome power. Super Saiyan 4 was one of the better-received elements of GT, so it's good to see Goku in this form joining the game.

From Dragon Ball Super, the game is adding three characters from the Future Trunks arc. Super Saiyan Rage Trunks, Fusion Zamasu, and Super Saiyan Blue Vegito are all coming to the game, letting you relive their intense battles from the series.

Furthermore, the game's official Facebook page is encouraging fans to take augmented reality photos through their phones of themselves with various Dragon Ball characters to unlock in-game extras. There are daily challenges for fans to complete in order to win more items--more details are available on the game's official website. 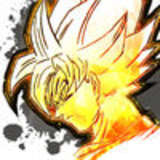