The doctor is in this April, when Dr. Mario brings his cold-killing, pill-stacking formula to the N64. We've played some games, killed some viruses, and talked some smack. Here are our impressions.

Nintendo's recent foray into puzzle games has been met with applause, after a pair of excellent Pokémon Puzzle League titles. However, these new games don't have the longevity or the history of a game like the king of puzzlers, Tetris. Puzzle games come and go, but the games of yesteryear continue to return, either greatly improved to take advantage of rapidly increasing system technology or ruined by a badly thought out gimmick. Nintendo's latest old-school remake puzzle game isn't Tetris, though. That's right, the doctor is in. Fans of Dr. Mario can look forward to four-player head-to-head virus-inoculating action and a multitude of other options in this faithful and substantially improved addition to the franchise.

The Dr. Mario 64 formula that made its predecessors so popular hasn't changed much. You and up to three opponents each sit atop large bottles. Each bottle houses a number of nasty red, yellow, or blue viruses. You then proceed to drop single- or dual-colored megavitamin capsule puzzle pieces into your bottle in order to line up the proper color to eliminate the offending virus. Misplacing your capsules will cause your bottle to fill up, which will end your game. If you create a chain or combo, you will send randomly placed trash pieces to one of your opponents' bottles. Interfering with other players is a mixed blessing, however, since both you and your opponent face a stall in the action as you wait for the trash pieces to fall into place.

A number of different play modes and options are available. Undoubtedly, the most worthwhile mode is the head-to-head game against the CPU or human opponents, where the object is to clear your game first, which earns you a star and the round. Earn three stars, and you win the match. You can also compete in a two-on-two match or play against the computer in a team battle. If racking up points is your thing, then a score-attack mode is available. Infinite Tetris-style games are available in the marathon mode, while the flash mode introduces the variable of blinking viruses. Your onscreen persona has no actual effect on gameplay, but the opportunity exists to unlock a number of hidden characters through the story mode. Besides those dueling rivals, Dr. Mario and Wario, you can compete as a mad scientist and as a number of strange things like insects and viruses. A relatively large number of characters are hidden, adding up to what should be a satisfying single-player game.

In order to tweak your game to your individual taste, Dr. Mario 64 lets you choose a different backdrop and music theme before your match, and it also lets you adjust your speed and difficulty settings. The different theme songs, including a number of tunes that will ring familiar if you have played the SNES version, are upbeat and are not distracting. Boastful or especially proficient doctors can choose to have a multiplier applied to the number of viruses needed to complete a round, or can choose to have a faster dropping pill. You can make this handicapping system affect all four players, which will inevitably prolong the game--a handy variation to the game for those times when you want a drawn-out conflict.

While fans of the franchise won't find many differences at the heart of Dr. Mario 64, the game plays as well as any of its previous versions, which are then exceeded by the party atmosphere made possible by the N64's four-player capability. Nintendo will be releasing Dr. Mario 64 at a value-driven price, set to retail for $29.95. Make sure to check back for our review of Dr. Mario 64 as the release date approaches. 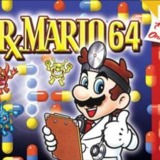