Day of the Tentacle, Full Throttle, and Grim Fandango are coming to Xbox Game Pass.

Quirky developer Double Fine Productions has announced that its classic LucasArts adventure games--Day of the Tentacle, Full Throttle, and Grim Fandango--hit Xbox Game Pass on October 29. This is the first time these games launch on Xbox consoles.

The studio took to Twitter to deliver the news. All three adventure games will be available to all Xbox Game Pass members. Double Fine confirmed in a follow-up tweet that each game will be playable on Android devices, Windows 10 PCs, and Xbox consoles (likely meaning the Xbox One and the forthcoming Xbox Series X/S).

Each adventure game originally launched in the '90s, developed and published by LucasArts, a game studio also responsible for Star Wars games like Star Wars: X-Wing and Star Wars: TIE Fighter. After ceasing operation as a developer in April 2013 following an acquisition by Disney in October 2012, Double Fine picked up the games.

It's official! Our classic LucasArts adventure game remasters of Day of the Tentacle, Full Throttle, and Grim Fandango are coming October 29 to Xbox Game Pass members!
Travel through time, cruise the open road, or solve mysteries in the Land of the Dead. All on Game Pass! pic.twitter.com/C0VyvE9Dvu

The studio has since released remasters of them. Grim Fandango dropped in 2015, Day of the Tentacle launched in 2016, and Full Throttle came out in 2017. All three games are available on a variety of platforms, including iOS, macOS, Nintendo Switch, PC, PlayStation 4, and PlayStation Vita. They now make their debut on Xbox.

Both the Xbox Series S and Series X launch on November 10 for $300 and $500, respectively. Check out our Xbox Series X/S preorder guide to learn which system is right for you, as well as which stores may have stock on launch day. 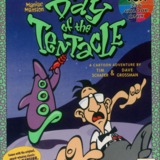