We travel to the bowels of Martian hell to bring you our hands-on impressions of John Carmack's first mobile effort.

Id Software's Doom all but invented the PC first-person-shooter genre. After posting on his blog details of his foray into J2ME programming, John Carmack has begun work on a Doom role-playing game. Just a few weeks into coding, the game is looking excellent. Carmack has repurposed the original Doom sprites and user interface, crafting a sizable RPG, the plot of which expounds on those of the three FPS Dooms. Weapons and monsters from the entire trilogy have been included, and each monster is vulnerable to a specific weapon. The Doom RPG plays a lot like its real-time predecessors, minus the fast-twitch gameplay. Set to launch in October, in conjunction with the film, Carmack's Doom RPG should be playable by anyone who's bought a handset within the past year.

The game opens with the same travel sequence seen in Doom 3. You reprise the role of a UAC space marine who's summoned to Mars to deal with a bad element among the facility researchers. Of course, these insurgents turn out to be hellspawn, borne from a dimensional rift. But hey, they seem to respond well to shotgun fire. Although the game is turn-based, you can still run, strafe, and shoot like the old days.

We played the opening tutorial level of the game, along with the "Reactor," a level set much later in this primarily linear RPG. Toward the endgame, enemies cooperate to a much greater extent. For example, the apollyon will resurrect fallen zombies, which continually attack you in tandem. As you slay these enemies, you'll level up, increasing the effectiveness of your attacks against lower-level creatures.

Many of Doom's signature elements are intact, like its explosive frag animations. When you unload on a zombie or revenant, it will explode in a delicious, pulpy mess, all amid classic auditory fanfare.

Doom RPG will provide fans with 10 levels, or approximately three and a half hours of pain and suffering. We look forward to romping through the nine circles of hell come October. 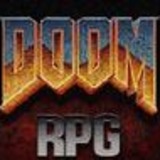