The picross-infused visual novel is truly something special thanks to the strength of the writing and characters. 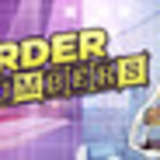 I love picross. The satisfaction of creating a pixelated image by solving a grid-based logic puzzle just scratches an itch for me in the way that others habitually play crosswords or sudoku. Since discovering nonogram puzzles on the DS, I've played so many variations I've lost count, and the wealth of options on the Nintendo Switch has made it a mainstay. I'll chip away at a handful of puzzles per day, and when I finish one there's always another waiting for me in the Eshop, usually for cheap. Most of these don't stand out in any particular way, other than supplying a fresh batch of puzzles to solve.

Murder By Numbers, however, is different. It's special.

Its novel premise caught some attention even outside the hardcore nonogrammer community. (This is not a term, but I intend to make it one.) A picross game with visual novel elements all set amid a murder mystery is a clever, campy idea that sparked plenty of well-deserved interest. The visual style and subject matter drew comparisons to Phoenix Wright. I was gladly down for some picross with light story elements. What I wasn't prepared for was a great story with light picross elements.

Protagonist Honor Mizrahi isn't a detective or lawyer, but a TV actress on a cheesy '90s crime procedural. She's thrown into the sleuthing business by chance when her producer turns up dead and she discovers a chipper robot named Scout. Scout helps provide the pretext for the puzzles themselves--he's scanning for objects of interest and deciphering what they are--but he also plays an important story function. The mystery behind where he came from drives most of the plot.

Much as I love the Phoenix Wright series, it can be a little wordy and obtuse, and sometimes it's clear that the story is referencing Japanese pop culture and barely converting it to Western references. This isn't the case in Murder By Numbers, which is precise, punchy, and very attuned to American culture. The characters slip in and out of clever turns-of-phrase, sassy jokes, nostalgic references, and groaner puns like old friends.

A big part of the sharpness of the writing is how the game deals with representation, even as filtered through the lens of its time period in the 1990s. Honor is a woman clearly rebuilding after an abusive relationship, and her ex shows elements of mental abuse and gaslighting. Her hairdresser and confidante is an out gay man, and one episode explores his relationship with the L.A. drag scene in the course of investigating an apparent hate crime. Another case involves an old Hollywood legend with retrograde views on gender roles. All of this is delivered with the light touch of writing that comes from a genuine place of experience and understanding. The characters aren't preachy--just good, dependable friends doing their best to support each other as they go through their larger-than-life adventures.

It's in these trappings that the picross puzzles take a backseat. It's the heart of the gameplay, but it was the writing that pulled me through. I may play a regular picross game over the course of months, but in Murder By Numbers I couldn't wait to see where the story would go next, so I kept marathoning through the puzzles that much faster. It all ends on a note that suggests more could come, and I hope it does. I want to investigate more crimes with Honor, I want to solve more puzzles with Scout, I want to have more silly chats with my cartoon friends.

I'm already off to the next picross game--Picross S4 from the always-dependable puzzle studio Jupiter--but Murder By Numbers has a special place in my heart. It stands the risk of flying under the radar and being missed, and that would be a real crime.

Nintendo Switch Firmware Update Is Here, But Don't Expect Much

Mario Kart Live Is Just $50 With This Cyber Monday Deal

Fall Guys Is Not Coming To Xbox Or Switch Soon

Nvidia Is Being Sued By The FTC Over ARM Merger

Cyberpunk 2077 Is Not Coming To Xbox Game Pass Anytime Soon