In Donkey Kong 64, Rare is attempting to wow players with the size of the stages, the amount of animation, the number of characters, the number of textures on the screen, and real-time lighting effects.


The original Donkey Kong Country for the SNES was impressive because Rare was able to introduce pre-rendered graphics to a 16-bit system. In Donkey Kong 64, Rare is attempting to wow players with the size of the stages, the amount of animation, the number of characters, the number of textures on the screen, and real-time lighting effects. All of this adds up to the game needing to be 8MB, meaning it'll have to have the RAM pak to function. Since the pak's required, it will be bundled with the game, for a price said by a rep to be no higher than that of The Legend of Zelda: Ocarina of Time (US $59.99).

Nintendo's Ken Lobb says the game has a little bit of Banjo-Kazooie and a little of Super Mario 64, but that it'll definitely be its own distinct animal. "The way the levels are laid out, it comes off like a 3D platform game. There's some wandering, but there's a very obvious goal, and oftentimes, that means up! And it wouldn't be Donkey Kong if there weren't vines." And there are vines, as well as other DKC elements like mine cart rides, and new features such as a coconut-shooting gun.

Each of the five characters (Donkey Kong, Diddy Kong, Tiny, Chunky, and Lanky) has different moves, such as the female character's spin/float. Once you open them up, you'll resume in the beginning of the game, but with stages that are distinctly different for each character, respectively. DK64's intro is a five-minute rap that spotlights the game's cast, and has to be seen to be believed.

At E3, we got a chance to put our hands on the game and the verdict was universally good. The version of DK64 we saw is a small collection of levels from the game. Which character (there are five in all) you play as depends on which level you enter. The environments are graphically superior to those seen in Banjo-Kazooie, and seem either the same size or bigger. The real time lighting effects are also impressive, but the prettiest things about the game are the incredibly polished and smooth characters. When one turns to face the screen, it looks almost as nice as the characters in the film Toy Story.

Playing the 3D barrel shooting stage (you aim by using a target in a first-person view) was fun, though about as easy as in the level within Donkey Kong Country. Meanwhile, the mine cart level was a blast and thankfully nowhere near as tough as the one in DKC. In it, you must collect 70 coins by leaning back and forth or jumping to snag them, while avoiding enemies in carts or other obstacles. You lose three coins every time you get hit. There are also switches in the track that you'll have to reach out and pull to open up sections of track that contain more coins.

The toy factory level puts you in the shoes of the female monkey Lanky, and she can spin her pigtails, Bugs Bunny-style, to slow her descent. This level really plays like something out of Banjo-Kazooie, but of course, due to the use of the 4MB expansion pak and the cart's extremely large size, the graphics are quite a bit better. Gameplay is much the same as Banjo-Kazooie and Mario 64, complete with a butt-stomp, a back-flip, and various punches and kicks. You'll also be grabbing quite a few bananas throughout the game, replacing Mario 64's coins.

Even with all the similarites to other titles, the feel of the levels is much more Donkey Kong then Mario or Banjo-Kazooie (that's Nintendo's company line on the game, but it seems to be true). We can't wait to get a chance to spend some real time with the game. 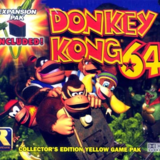