Backstabbing your friends is all part of this multiplayer experience.

In Dokapon Kingdom, players are pit against one another in hopes of winning the crown and the hand of the lovely Princess Penny. Atlus claims that this cut-throat experience can tear friendships apart. Such was the case when members of the Atlus team came in to play with us; gauntlets were thrown and battles were fought. Dokapon Kingdom has some similarities to games like Mario Party, where the world is set up like a giant board game and players take turns to advance and earn money. However, the role-playing game elements let you level, collect items, upgrade equipment, and customize your character as you advance through the story mode.

The kingdom of Dokapon is ruled by a wealthy king, who has called adventurers from far and wide to help get rid of monsters that have been pilfering his gold. Up to four players can play using the multitap or hotseat mode; otherwise the computer can step in. The primary goal of the game is to make off with the most money. Liberating towns is the most lucrative way, but there are plenty of other fun and sneaky ways to get loot. Each player begins by spinning a wheel with the numbers zero through six to determine how many steps to take on the map. Depending on your class, you can perform special abilities before you take your spin. Magicians, for example, can cast spells before they move to cripple an enemy or another player. There are 12 classes to choose from and two that are hidden, and you can change your class whenever you want. Each class has its own special abilities, so depending on where you are in the game, you may want to swap. Thieves in particular can come in handy because they have the ability to steal from other players by simply running past them on the board.

The kingdom is spread out into seven continents, so there is quite a bit of land to cover on this continuous map. We had a chance to play for about an hour, and our goal was to defeat Rico Jr., who had stolen the princess's piggy bank. Beginning from the castle, it was a race to see who could make it to Rico Jr. first. After you spin, you can zoom out to scan the area, and arrows will indicate where you may go. There are enemy encounters when you land on a yellow spot and special items to receive if you land on a specifically marked area. A day goes by after each player takes a turn, and at the end of the week, the gold is tallied up to see who is in the lead.

Battles are turn-based, and you get only one turn each round, so the game feels like it moves relatively quickly. In a fight against a monster or another player, you have four commands at your disposal. Depending on who goes first, one player attacks, the other defends, and then they switch. For example, triangle may be an offensive spell, and the defending player will have triangle as the corresponding magic defense command. It boils down to guessing what your opponents might do. If you happen to block your opponents' magic spell, you'll take less damage. But if you block your opponents' magic when they decide to attack, chances are you will lose the battle. With only one shot, you will want to take them out quickly, or if you'd rather not take the chance, it's wiser to just give up. When you give up or die, the winner can take your items, play pranks on you, give you negative status effects, or pass along a cursed item. It doesn't benefit you to play a prank, but it is amusing to see your opponents with graffiti on their face or poo in their hair. You can also change their name--our thief was renamed to "I is teh suk." The newly renamed thief also had the benefit of getting a sore on his foot, which limited his movement to one step for several turns.

There are plenty of items to obtain; for instance, some let you spin with multiple dials so that you may move quickly back to the castle or escape the wrath of the last person you killed. There are magic shops and item shops along the way, where you can pick things up or steal items. A successful robbery will earn you some gold, but if you fail at the rock-paper-scissors game that comes up, you become wanted, and other players can kill you for a bounty. When you're wanted, you cannot return to the castle to collect any reward. There is an item that lets you put the blame on someone else if you happen to fail the robbery attempt. You can mess with your opponents in various ways, including sending unwanted gifts to the king, in care of someone else. There is character customization, which we didn't get to see, but story mode will last around 15 hours depending on how vicious people get with each other. There is a Town Race mode that is shorter; you'll have a goal to meet, instead of playing through an entire game.

This bright and colorful party RPG is an intriguing alternative to the traditional party game where you play minigame after minigame. Dokapon Kingdom offers a variety of ways to play dirty, even though most of the characters look quite innocent with their big eyes and quirky demeanor. The "friendship destroying" party starts October 14 and will also be available on the Wii. 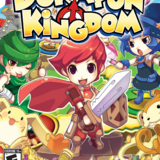