Frontier Development's canine simulation game is coming to the US this summer, and we've got details straight from E3 2004.

"Grand Theft Auto with dogs" is how Dog's Life was explained to us. This PlayStation 2 exclusive third-person (or, in this case, third-canine) adventure game has actually been out in Europe for quite some time and has received some good buzz in that region. The game will be making its way to the US, courtesy of publisher Hip Games, this July, and we got ourselves a peek at the game at the company's E3 2004 booth.

Dog's Life tells the tale of a young pup named Jake, whose girlfriend, Daisy, is kidnapped by nasty dognappers. Jake will have to travel across 18 different locations to find her, and along the way, he'll encounter numerous adventures and minigames. One of the environments we observed in the game was a rural, backcountry area, where an old man on a rocking chair slept peacefully next to his shack. This environment contained numerous elements we could interact with, ranging from a small ball we could pick up and toss through a basketball hoop, to a flock of chickens that we could actually pick up with our mouth and shake about, removing all of its feathers in the process. We could even interact with the old man himself, who, once we began barking at him, rudely awoke and then sputtered nonsense from a rather risque dream he'd been having.

Each of the game's environments is pretty much entirely free-roaming, and you'll have all sorts of objectives to take care of throughout each one. As you play, you will encounter multiple other dogs, each of which has its own claimed territory. If you choose, you can challenge other dogs to various types of contests, which include little games like a button mashing tug-of-war to an almost Othello-like game where you must claim as much territory as possible in an area by urinating on specific spots. (No, you didn't read that wrong.) Anyhow, if you beat opposing dogs, you will earn bones. Bones are almost like a leveling system in the game, since the more bones you have, the tougher you'll be to beat. However, competing against other, higher-boned dogs is ill-advised, because you'll likely be beaten handily. Once you've gained a decent bone count, you will be able to command lower-leveled dogs into performing certain mission objectives for you.

Jake has a few different abilities he can take advantage of, including something called "smellovision." When you enact smellovision, you will be transported into a first-person perspective view, and as you travel, the world will turn into a sepia-toned background with a number of colored scents appearing all over the place. There are four different categories for scents, ranging from pleasant to putrid, and in some cases these scents can lead you to buried bones. In addition to this, Jake can beg for items from humans, lie down and play dead, and even defecate, should he be so inclined to do so.

As intriguing as Dog's Life is, the game itself seems pretty simplistic and will likely be far more appealing to a younger gaming audience than any other demographic. Still, we enjoyed what we played and look forward to seeing more of the game before its summer release date. We'll have more on Dog's Life soon. 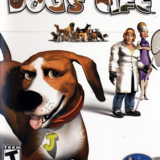