Doctor Who landing on Wii, DS

While Doctor Who has a long history with books, merchandising tie-ins, and licensed products, the Time Lord has rarely ventured into the world of games. David Tennant's 10th Doctor did make a game appearance via the Doctor Who Top Trumps titles, but the iconic character's previous appearance in a full-fledged adventure game was 1997's Destiny of the Doctors.

Matt Smith seems to be faring better in terms of digital adventures, however, as the show's production teams are starting to embrace gaming. The BBC has recently begun releasing Doctor Who: The Adventure games online and has now confirmed that two retail games featuring the bow-tied incarnation of the storied time traveller are on the way.

Doctor Who: Evacuation Earth and Doctor Who: Return to Earth are coming to the Nintendo DS and Wii respectively and are due out in the UK, Australia, New Zealand, and select European territories later this year. The games, which are aimed at the younger end of the Doctor Who fan base, may be released in other territories at a later date, but the BBC would not confirm any specific plans for other regions when contacted by GameSpot.

Matt Smith, who stars in the current run of the series as the 11th incarnation of the Gallifreyan time-traveller, will star in the game alongside his companion, Amy Pond, voiced by actress Karen Gillan. Judging by the box shots for the two titles, Return to Earth will feature longtime Time Lord antagonists the Cybermen, while Evacuation Earth will feature the menacing Daleks. Writing for the games will be done by Asylum in conjunction with the show's production team.

Both titles are being developed by Asylum Entertainment, which specialises in "the major brand name children's market." Asylum's most recent console title was Horrid Henry: Mission of Mischief, which was released on the Wii and DS earlier this year. 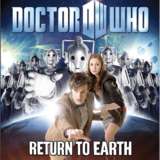