From Software is creating a new utility that lets users create their own adventure games for the PSP.

Owners of the PlayStation Portable will soon be able to make their own adventure games for the handheld. According to the latest issue of Famitsu magazine, From Software will release a utility game, called Adventure Player, that will let gamers create an adventure game on PCs and then play it on the road with the mobile PSP.

Playing a user-created adventure game on the PSP will require the Adventure Player UMD software and a Memory Stick Duo with the saved game data. Wannabe developers will create their own game data on PCs by using a development kit called Adventure Player Studio, which will be downloadable when Adventure Player hits retailers.

Details on the development kit haven't been released yet, so the level of customization is currently unknown. However, provided they have the programming skills, it seems that Adventure Player will let gamers make a full game. For those unfamiliar with the ins and outs of game development, simple games can be crafted using images downloaded or shot with a digital camera.

Adventure Player will come with three adventure game scripts by default. One of the game scripts to be included is Echo Night, which was a title released by From Software on the PlayStation in 1998. There will also be new scripts and other games to download from the company's official site. The company plans to offer six downloadable packs at launch, and it expects to release two additional pieces of content on a weekly basis. From Software also hopes that it can collaborate with other game publishers to release various kinds of content for Adventure Player.

In addition to adventure games, Adventure Player also lets users create other kinds of games, such as puzzle games and quiz games. Of course, regardless of what type of games users create, they'll be able to send them to fellow PSP owners via the Internet or via the PSP's Wi-Fi connection.

Adventure Player will be released in Japan this June. The game will be priced at 3,990 yen ($38). There are no immediate plans to release the utility in North America. 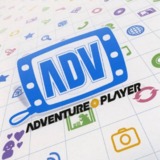