Larian Studios and CDV Software have announced that Divine Divinity, their fantasy role-playing game, has gone gold and will ship to stores in Germany this month. The game, which is scheduled for release in the US in September, has been in development for more than two years. Players assume the role of one of six different heroes on an epic quest through a large medieval fantasy world.

While the game's isometric real-time action may look similar to Blizzard's best-selling Diablo games, Divine Divinity features a huge assortment of skills and options that let players experience the game in a variety of different ways. The gameworld features more than 70 different towns and more than 2,000 individual rooms and dungeons to explore. Along the way, players will encounter more than 100 types of monsters and more than 150 different nonplayer characters. CDV estimates the game can take anywhere from 40 to 200 hours to complete, depending on the choices players make during the game and their style of play. For more information, take a look at our previous coverage of the game. 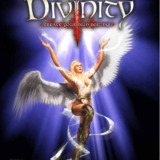