Capcom has announced plans to bring some of its classic Disney-based Super Nintendo games to the Game Boy Advance this year. Leading the charge is Disney's Aladdin, a 2D side-scroller based on the 1993 movie of the same name.

In the game, you'll take on the role of the title character, Aladdin, and his sidekick, a monkey named Abu. You'll strike foes by throwing apples at them and move through a handful of different environments, ranging from the evil Jafar's castle to the inside of a genie's lamp. Aside from regular platforming action, you will also pilot a magic carpet in some sections.

The original Super Nintendo version of Disney's Aladdin was known for its bright colors and smooth animation. We expect that these strong points will make their way over to the Game Boy Advance quite well. 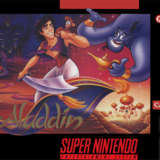