Buena Vista Games absorbs one developer while starting up another stocked with ex-EA designers.

These moves, announced Tuesday, come as a number of other players are bolstering their competitive edges and as the popularity of games is rising. "Avalanche Software ... is a perfect fit for our Disney-based franchises," Graham Hopper, Buena Vista's general manager, said in a statement.

Avalanche, which created such games as Tak and the Power of Juju, is also developing Disney's Chicken Little video games. Disney plans to release its Chicken Little movie in November.

Avalanche, which is 10 years old and has more than 100 artists, programmers, and game designers, will operate as a division of Buena Vista Games and will remain housed in Salt Lake City. Terms of the deal were not disclosed.

Buena Vista, meanwhile, has also opened a new game development studio in Vancouver, British Columbia, that will operate as a wholly owned subsidiary. The studio is led by a number of former Electronic Arts developers who were heavily involved in EA's NBA Street and Def Jam games. It has about 20 game developers on staff, so far. 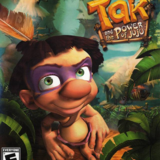 View Comments (0)
Tak and the Power of Juju