An exact release date for Disgaea 4 Complete Plus on PC has not been confirmed.

Developer Nippon Ichi Software (or NIS) has announced its strategy RPG Disgaea 4 Complete Plus, which is a definitive edition of Disgaea 4, will launch on Xbox Game Pass for PC and Steam this fall.

Along with confirmation that Disgaea 4 Complete Plus will make its way to PC this fall, NIS America shared an announcement trailer. The trailer, below, shows the colorful cast of characters, over-the-top battles, and more.

Additionally, with the game coming to PC, the system requirements have been fully outlined. You can check below to see if your rig can handle the strategy RPG.

The Complete Plus edition of Disgaea 4 features all the additional characters and scenarios from the prior versions of the game. It also includes high-level spells and job-specific skills from Disgaea 4, as well as options for English or Japanese audio and for English or French text.

Disgaea 4 originally launched in February 2011 for PlayStation 3 before jumping to PlayStation Vita in 2014. It arrived on Nintendo Switch and PlayStation 4 in 2019 as Disgaea 4 Complete Plus. We scored the game in 2015 a 7/10 In GameSpot's Disgaea 4 review, saying, "If previous Disgaea games didn't light your fire, nothing here will bring you into the fold, but if you enjoyed the evil exploits of earlier series heroes, Valvatorez's crusade to overthrow the corrupt forces of the netherworld is sure to entertain you." 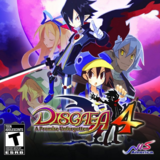