The PlayStation Vita is poised to receive a new game next month despite having been discontinued for two years. Developer Flying Oak Games announced that its roguelite ScourgeBringer is coming to the handheld on April 22.

The news comes via the developer's Twitter account, where Flying Oak Games also confirmed that ScourgeBringer hits the PlayStation 4 on the same day. The studio said there will be physical versions on PlayStation 4 and PlayStation Vita, with PS4 preorders for the Standard and Collector's edition now live on PS Vita preorders opening "in a few days." It's unclear if the game will feature cross-save support. All versions are region-free and include all languages.

ScourgeBringer is a challenging roguelite similar to Dead Cells and Forgone. Players control the female warrior Kyhra to uncover the truth of what happened to the world and her people. It's on all the major platforms, including Nintendo Switch, PC, Xbox One, and Xbox Series X|S.

The PlayStation Vita was discontinued in 2019, with the production of new physical games wrapping up in March of the same year. As of March 2019, there haven't been any new PlayStation Vita systems or physical games for it. This doesn't mean there haven't been new games for the Vita since it was discontinued in 2019. According to GameSpot sister site Metacritic, February 2021 alone saw three new Vita titles: Gods of Almagest, Habroxia 2, and Pachi Pachi On A Roll. ScourgeBringer could just be the first physical Vita game in a long time.

The Vita was found in the headlines last year during a The Last of Us Part II gameplay sequence as part of a State of Play livestream. Ellie, one of the playable characters, can be seen interacting with--and ultimately stabbing in the neck--an unsuspecting PS Vita player. 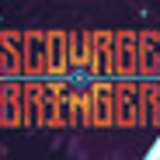