The '90s dinosaur-hunting action games are coming back with new versions for PC.

Both games "will be re-mastered for today's modern computers with enhanced graphics and other improvements," the developer said in a statement.

Release dates were not announced, but both games will be available to buy through Steam, the Humble Bundle store, GOG, GamersGate, Green Man Gaming, and through the Night Dive Studios website.

"When Turok: Dinosaur Hunter was first released it was nothing short of revolutionary," Night Dive Studios CEO Stephen Kick said. "To that point, no game had ever offered the combination of graphics and an open world environment that Turok featured. We are very excited to have the opportunity to bring this great franchise back to life and to be able to share these great titles with today's gaming audience."

Night Dive Studios has remastered many classic PC titles, including System Shock 2, Sid Meier's Colonization, and Darklands, among others.

"Night Dive Studios believes that classic video games should never be abandoned or forgotten," the company says. "They should be available to play at any time, run out of the box without the hassle of installing outdated drivers, or using obsolete hardware. Movies are restored, books are digitized, and art is preserved to be appreciated for all time. Why should games be any different?"

For more on the original games, check out GameSpot's Turok: Dinosaur Hunter and Turok 2 reviews. 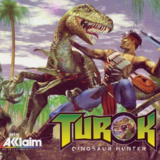